Over the last few years there’s been a massive boom in wearable tech with leading companies such as Nike, Google and Apple spending millions on innovation. So it should come as no surprise that Apple would make headway into the tap-and-go payment tech market with these innovative Apple payment wristbands. 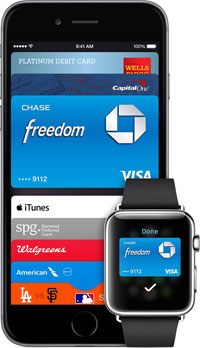 Whichever tech product wins the day will heavily rely on innovation and marketing. Apple have already been making waves in payment technologies with Apple Pay which now brings its payment simplicity to the Apple Watch. Apple pay is rolling out in the UK this month (July).

Not just Apple payment wristbands but all wearable tech in general is taking off.

It is estimated that 75 million wearable tech products will be sold in 2015 to people looking for payment alternatives to the bank card. It is expected in the UK that hundreds of thousands of payment wristbands will be distributed by Gemalto, a company better known for manufacturing SIM cards. CCS Insight predicts wearable tech to reach 340 million devices by 2018.

“People want to tell their payment provider how they want to pay and not be told in the traditional way of ‘here’s your plastic, now get on with it.” – Howard Berg, senior vice president at Gemalto.

Part of the surge in ‘contactless’ payment technology can be attributed to removing the symbolic gesture of handing over money to pay for something. This has always been seen in marketing as one of a number of ‘pain points’ in the purchase cycle. Secure and easy payment wristbands are expected to help overcome some this.

Take-up of new technologies has always had landmarks like anything else. It is expected that the Apple payment wristbands will be one of these landmarks which will pave the way for the technology to become ubiquitous.

Other companies are already dipping their toe with Barclays launching BPay, a payment device that can be fitted to a wristband or key fob. Caixabank in Spain distributed 30,000+ wristbands in 2014 and is offering them with FC Barcelona branding in 2015. No doubt there will be more to come from the Apple Payment Wristbands.