Wristbands for Tracking Your Child: Dystopian or Not?

It should come as no surprise when we hear about overcautious parents looking to track their children using RFID chipped wristbands that are loaded with behaviour patterns and expected routes and locations for the child.

Parents will be able to monitor, locate, track and log every movement of their children at any given time of day. Of course we won’t mention Google already doing this with its Android customers every day. Perhaps they too see their Android users as their little children that need to be tagged and monitored with the Google equivalent of RFID wristbands.

Thoughts of the Future.

Did you ever wonder what the future might be like? A future full of wondrous and fantastical technology of all kinds is often what we think of. Generally when we think of the future we tend think of a much safer, more domesticated landscape.

The polar opposite view of the future is the dystopian nightmare of being completely controlled, monitored…thought control…physical control…but not by ourselves of course, by someone else! And the reasoning behind this kind of right wing view would be that it is for our own good.

It is with these considerations in mind that we should look at why anyone would want to use a tracking device rubber or silicone wristband to keep watch on their children. Parents are the ultimate Stasi!

Cisco has a Vision.

Recently in Vegas at the Consumer Electronics Show Cisco Systems hosted a seminar on the future of parenting. Robert Barlow made a remarkable presentation with animation, graphs and statistics in which monitoring your child’s every move was an everyday part of life. Apparently wearable tech is a huge growth industry.

Films often conjure up the idea of a clinical, white, modern, controlled landscape which is clearly in stark contrast to the fierce and dangerous opposite world of now we are sold every day by the media. 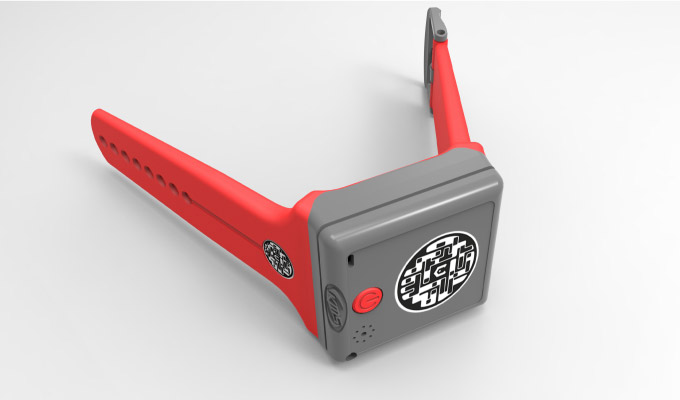 Child tracking wristbands coming to a crèche near you…

A paranoid life, I’ll grant him that, but nevertheless it’s a slice of life that Cisco seems to think is worth investing in. The child monitoring wristband seminar was attended by rich folk from all over the globe who are clearly the most paranoid about the well-being and whereabouts of their offspring.

With you good reason you might say, the mega-rich peruse a different landscape to most people, when their kids venture into the ‘real world’ who knows what could happen?
Rich folk also like to fully optimise their physical well-being along with their life in general; they have more to lose than most other people.

All this considered it should come as no surprise to anyone that optimised lifestyle and tracking wristbands would have a certain bent appeal.