Ever been intrigued by promotional wristbands? They have an interesting history and have been employed for all manner of promotional causes and events. They are light, comfortable and extremely versatile with this versatility bringing them into the lives and homes of millions of people across the globe. 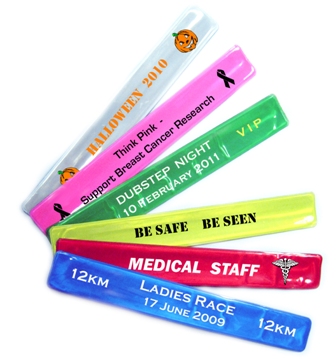 In 1983 Stuart Anders a Wisconsin teacher invented what would become famously known as the ‘Slap Wrap’. By chance Anders showed his invention to Philip Bart, an agent who represented toy inventors. Hundreds of prototypes were made for the Toy Fair held in February in New York and the rest is history.

The slap wrap curved to the shape of the wearer when slapped against the wrist and set the wheel in motion for the promotional wristbands’ entry into contemporary daily life. Slap wraps are still used to day in many different forms and as promotional tools multi-national companies such as nike and adidas with one company even inventing a slap wrap silicone watch.

2004 – Livestrong with No Compromise.

From 2004 and the Lance Armstrong and the Livestrong campaign for cancer support, silicone wristbands have become synonymous with charitable fundraising, awareness and support of many major causes. The yellow, debossed silicone wristbands became an overnight sensation worldwide and were spotted on the wrists of hundreds of thousands of supporters.

The American tennis player Andy Roddick uses a blue silicone wristband with ‘No Compromise’ debossed into it to raise money for the Andy Roddick Foundation. Roddick’s foundation is dedicated to helping the lives of at-risk children and the wristbands have been worn by fans and fellow tennis players the world over.

Causes that use promotional silicone wristbands:

Silicone wristbands have become ‘the’ choice for building awareness for noble causes with cause marketing being used raise money and to strengthen community ties.

More recently many celebrities have been ‘spotted’ with a distinctive silicone wristband on their wrists. Wearers are claiming it can help with balance, strength and flexibility and they have become increasingly popular around the professional golf circuit.

This hasn’t stopped the power balance wristband becoming an increasing popular piece of silicone hocus pocus and making the inventors very rich in the process.

The LED wristbands  or ‘Xylobands’ come in a variety of colours and also have the bands twitter account printed onto them which promotes the bands live DVD release. The wristbands come on at intervals during the concerts and turn the audience into a giant, flashing, multi-coloured display.

The LED wristbands inventors have been quoted as saying “the low-power, long-range wireless technology behind the product is a game changer for how audiences can interact with performers and become an integral part of the concert experience.”

What is certain is that the same sense of community that is created by many other forms of wristbands is heightened with the use of the LED promotional wristbands. When the concerts are over they are then kept as mementos for the event.